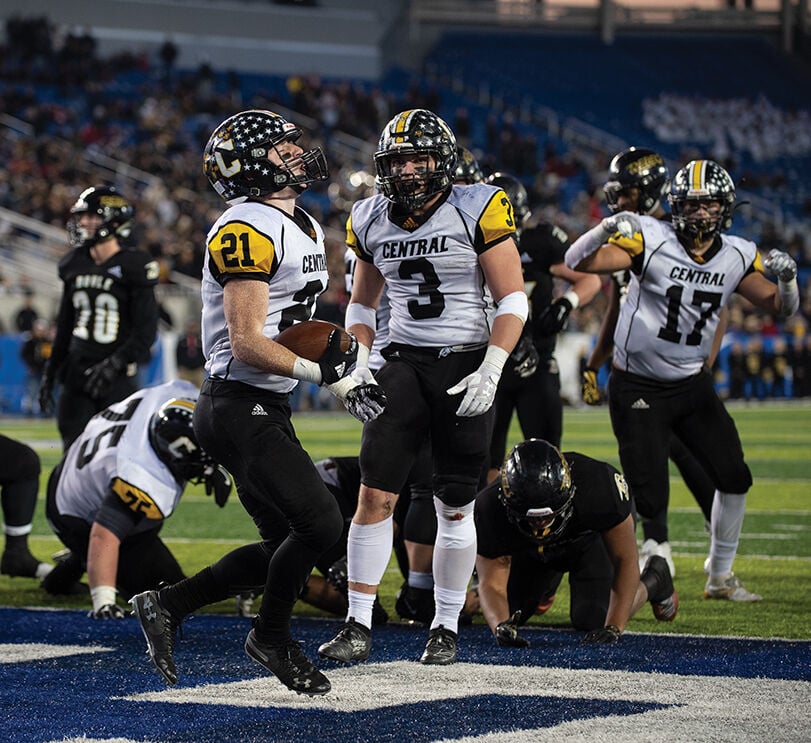 Johnson Central’s Dillon Preston celebrates after scoring a touchdown in the Class 4A state championship. 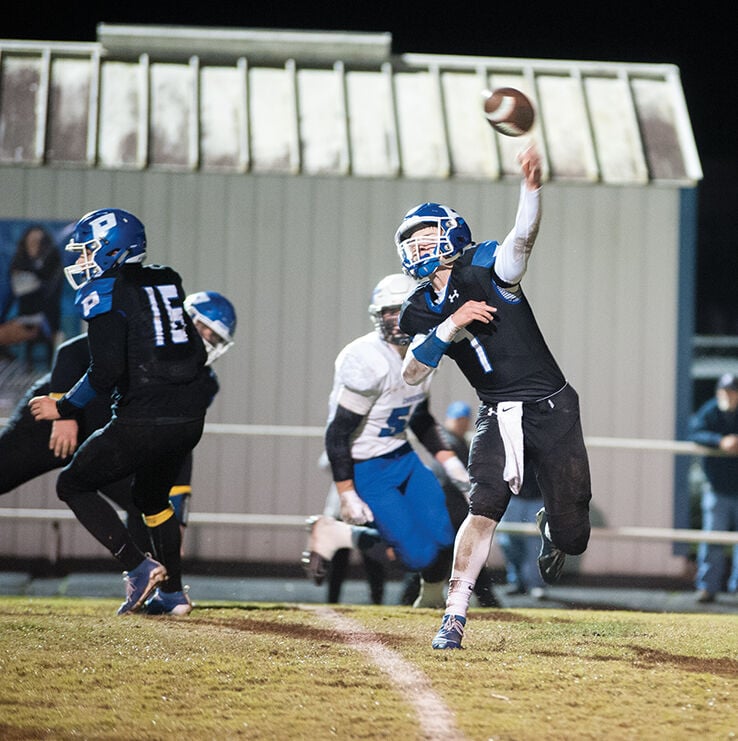 Paintsville quarterback Jake Hyden throws the ball in this file photo. Hyden led the Tigers to picked up a 39-24 win over East Jessamine in the season opener.

The Johnson Central Golden Eagles got the season off to a running start in their 36-0 win over a tough Bell County opponent.

Seriously, the Golden Eagles literally ran the oval rock all over the playground rushing for 321 total team yards.

Before the season, questions floated around the Johnson Central backfield and how would the Golden Eagles  replace Devin Johnson.

The answer, at least for Week 1, was Dillion Preston.

Preston ran for 143 yards on 17 carries, reaching the end zone four times for the Golden Eagles.

However, Johnson Central wasn’t shy about letting some of their other talent get in on the action with Bladen Sexton rushing for 71 yards on only nine carries.

Before the start of the season, the Paintsville Harold released a piece that talked about the new gunslinger in town Grant Rice.

Rice did what was asked of him in his season debut completing two of his four passes for 49 yards and a TD.

Rice added to his total yards by also rushing for 23 yards.

Now, the numbers for Rice may not be eye popping, but it does tell a story.

Rice managed the offense well and did exactly what he said he would do, lean on Preston, the offensive line, and the Johnson Central Rushing attack.

The TD Rice threw was to Preston on a nine yard hookup.

Honestly, its too early to tell what the Johnson Central offense will evolve into as the season continues.

What the numbers from the first game of the season says is that the Golden Eagles haven’t missed a beat on the ground and will probably continue to rely on the athletes in the backfield until they are forced to go to the air.

But, whether they are forced to or not, even though it was a small sample size, Rice showed two things in the two completions he had.

One being he can deliver in the red zone and two that he has range and can deliver accurately down field.

The second being proven when Rice connected with Toby Spriggs on a 40-yard hookup.

Yeah folks that’s not a typo, but whats more, the Johnson Central defense controlled the line of scrimmage.

Jesse McCoy led Johnson Central defense in that category notching four tackles for loss as Mason Lemaster followed with three and Andrew Burchett along with Bradyn Price followed close behind with two a piece.

Johnson Central is one a Bye Week this week. The Golden Eagles are scheduled to visit Simon Kenton Saturday, September 25 at 7:00 p.m.

The East Jessamine Jaguars may as well have been playing hide and seek with Paintsville’s Jake Hyden.

Unfortunately for the Jaguars, Hyden was as elusive as ever and by the time the Jaguars found him he had already made it to the end zone.

Hyden was viewed as a constant coming into the season, meaning his production was almost certain, but in his Week 1, debut Hyden absolutely went off.

The Paintsville Quarterback went to the air 18 times connecting on 10 of those attempts for 192 passing yards and two TDs.

How about the 107 rushing yards Hyden racked up that led to two TDs?

The senior led the offense beautifully and took advantage of every opportunity his line created.

However, Hyden wasn’t the only one who benefitted from the superb line play.

Running back Harris Phelps exploded in his Week 1 debut rushing for 144 yards on 23 carries and two TDs.

The Paintsville offense was clicking on all cylinders and simply couldn’t be stopped.

Adding to the absurd game for Hyden, it should be noted that the quarterback completed passes to five different receivers.

The Tiger defense was led by Mason Lovely, who amassed 17 total tackles in Paintsville’s first outing.

The front seven for the Tigers were constantly getting pressure on the East Jessamine quarterback.

So much so that the Paintsville defense forced an errand throw that fell into the waiting hands of Jonah Porter for the only interception of the game and the first of the Tigers season.

Porter didn’t stop after just getting the INT though; he then returned it for 50 yards putting the Tigers in great field position for the following drive.

If Paintsville can continue their play behind an ever-versatile offense and a stout bend but don’t break defense then the possibilities for them this season are boundless.

Now, the Tigers are prepping for their first home game on Saturday against Crittenden County.