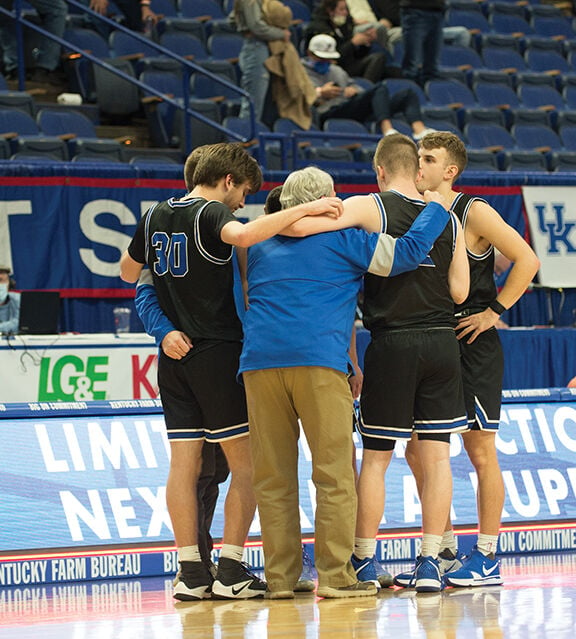 After Paintsville fell to Boyle County 70-56 last Thursday evening in the opening round of the KHSAA Boys Sweet 16 presented by UK Healthcare, the Tiger seniors huddled together on the Rupp Arena court for one final time. 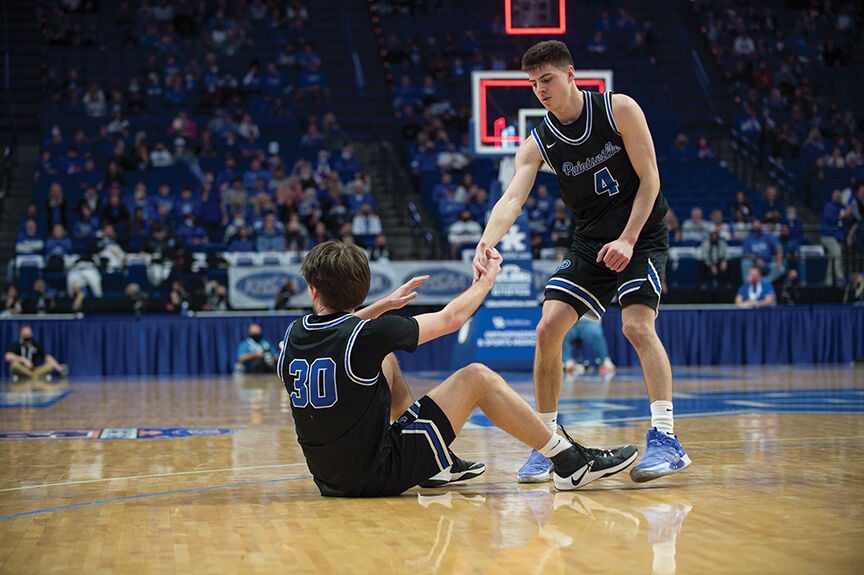 Paintsville’s Braxton Tharp (4) helps up teammate Ryan Gibson (30) in the first half against Boyle County in the opening round of the Sweet 16. 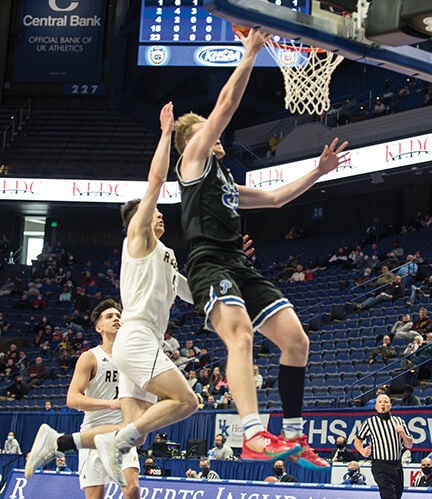 Paintsville’s Baron Ratliff goes up for a layup against a Boyle County defender last Thursday in the opening round of the KHSAA Boys Sweet 16 presented by UK Healthcare.

The dream of making it to Rupp Arena was realized for Paintsville on Thursday as the Tigers traveled to Lexington to take on Boyle County in the first round of the KHSAA Boys Sweet Sixteen State Tournament presented by UK Healthcare.

After holding the lead at the end of the first quarter and second, Paintsville began to struggle and ended up falling to Boyle County 70-56.

“I feel like we played extremely hard,” said Landon Slone, Head coach of the Tigers. “Our execution in the second half just wasn’t there. We turned the ball over way too much and I think their pressure sped us up. I’m proud of our guys and they fought like we wanted them to, but we just weren’t able to pull this one out in the end.”

Fugate had an eight-point first quarter to help the Tigers claim a 19-14 lead by the end of the first quarter.

The five-point lead Paintsville built in the first quarter was able to be sustained throughout the second as both teams managed eight points apiece, making the halftime score 27-22.

Something was still holding the Tigers back though, and from looking at the rebounding margin in the first half (15-6, Boyle County), it could have been that according to coach Slone.

“It hurt bad (being out rebounded) in the second half, but it hurt in the first as well,” said Slone. “I feel like we would have had a bigger lead at halftime. I think it was a five point lead. They got a couple second chance opportunities there at the end of the first half. Just the overall energy of them coming out and wanting it more in the second half.”

From the outside looking in it would be easy to say the rebounding margin in the first half didn’t really hurt the Tigers.

However, Slone is 100 percent right in saying it did.

Basketball is a war of attrition and every little thing can matter in the grand scheme by the end of a game.

Losing that margin was about to catch up to the Tigers in half No. 2.

Paintsville started the second half strong extending their five-point lead to an 11-point lead thanks to a 6-0 run that started at 7:10 and lasted until 4:50 in the third quarter.

Boyle County negated the run almost immediately after their timeout at the 5:05 mark in the third quarter.

By the end of the third quarter Boyle County pulled within one point as the Tigers had a 41-40 lead at quarters end.

“They played very physical defense,” said Colby Fugate. “We just kept turning it over and couldn’t get what we wanted.”

Boyle County made two runs in the fourth quarter that led to their 70-56 win over the Tigers.

Paintsville was then forced to foul and Boyle County was able to secure the 70-56 win over the Tigers to advance.

“It was a dream come true,” said Connor Fugate on the experience of playing at Rupp Arena. “Especially for the four seniors who have worked hard their whole life to be here. I can’t thank them enough for helping us get here.”

Colby Fugate shared the same sentiment as his brother saying, “It was a great experience and we didn’t get what we wanted.

“We wanted to play more than one game and it didn’t go our way, but like Connor said I really can’t thank the four seniors enough.”

With the anguish of accomplishing so much in this season and falling short of their ultimate goal the fire is fueled and the Tigers could be right back at Rupp Arena in the next upcoming season.

“Thankful,” said Slone. “I’m just thankful for our seniors and thankful for every player in that locker room. They turned their season around, I think at one point they were 5-7 at one point and they could have rolled over at one point but they didn’t, they kept fighting, they learned, they grew as a team and found an identity. Overall the message is that we thank them for not just what they did for our school but our community as well. They did something that hadn’t been done at Paintsville in 13 years and hopefully they have set the tone for what we can do over the next couple of years.”

The Tigers finished the season with a 15-9 record, claiming both the 57th District title and the 15th Region title along the way.

Paintsville is looking to build on the foundation it laid this season.