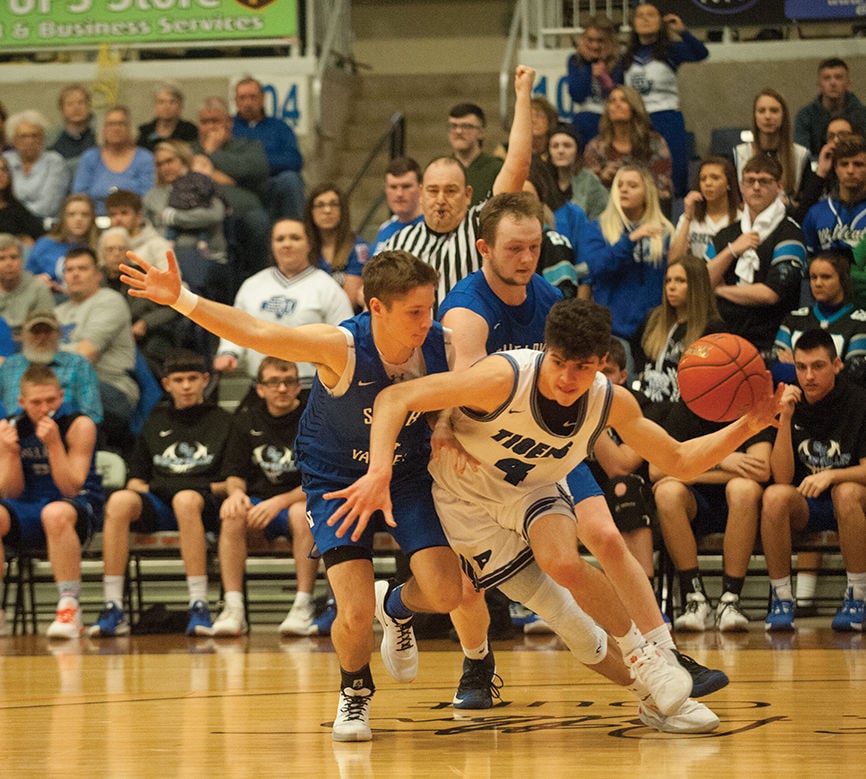 Paintsville guard Braxton Tharp is guarded by Shelby Valley’s Russ Osborne and Kaden Robinson in the final seconds of the 15th Region All “A” Classic championship. 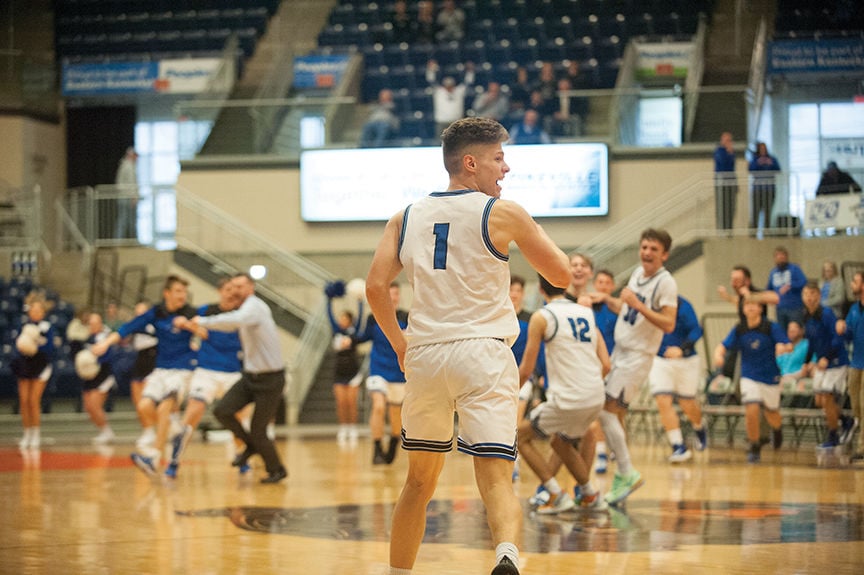 Paintsville’s Nick Keeton celebrates as his teammates and coaches storm the court after the Tigers picked up a 57-55 win over Shelby Valley to capture the 15th Region All “A” Classic championship. 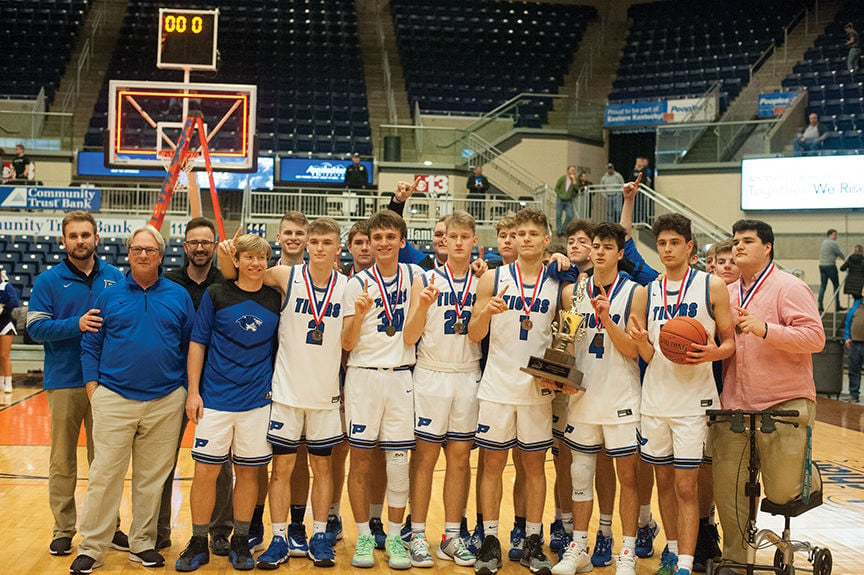 Paintsville celebrates after winning the 15th Region All “A” Classic championship against Shelby Valley 57-55 Sunday at the Appalachian Wireless Arena. 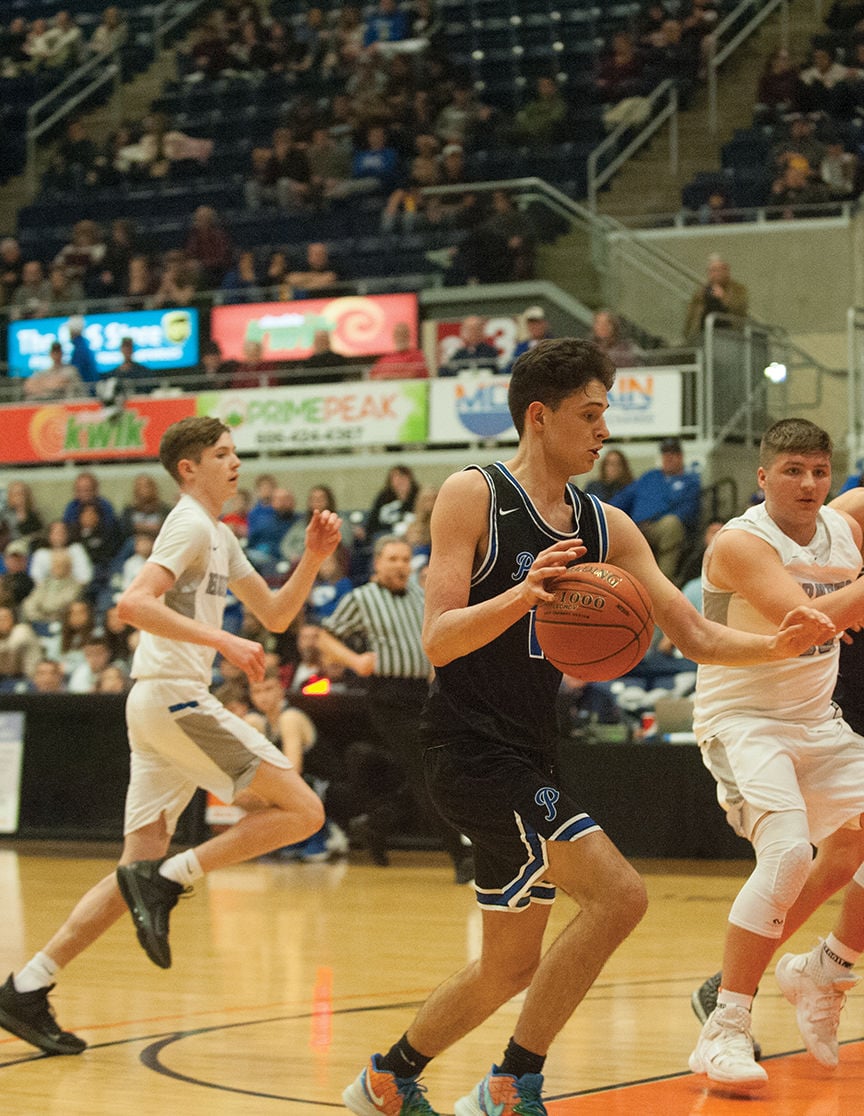 Paintsville’s Colby Fugate dribbles the ball down the court against Phelps Saturday night in the 15th Region semifinals.

Shelby Valley looked poised to go back to the All “A” Classic state championship for a second straight season.

Sometimes looks can be deceiving as Paintsville fought and clawed to a 57-55 win over the Wildcats Sunday at the Appalachian Wireless Arena to claim the 15th Region All “A” Classic title.

Paintsville will take on Harlan at 6:30 p.m. Thursday in the opening round of the All “A” Classic state tournament at the McBrayer Arena in Richmond.

Shelby Valley jumped out to a 15-5 lead on the Tigers.

Paintsville started to chip away little by little after that.

Potter answered as he was fouled on a three-point attempt. He made all three free throws to put the Wildcats up 21-17 with 2:30 left. He scored again as the time ran out of the first half to give the Wildcats a 29-19 halftime lead.

Potter scored 34 points and pulled down seven rebounds to lead the Wildcats.

In the the third quarter, Paintsville fought all the way back into the game.

Shelby Valley and Paintsville were tied at 40-40 entering the fourth quarter of play.

Fugate led the way for Paintsville finishing with 34 points and four rebounds.

Nick Keeton opened the fourth with a basket for the Tigers and Fugate scored again to give Paintsville a 44-40 lead.

Ryan Gibson followed with a basket to push the Paintsville lead to 49-44.

In the game, Potter made six of his 12 three-point attempts, while Fugate made four of his 12 attempts from deep.

Potter knocked down another three to close the gap to four with just 1:52 to play.

Shelby Valley’s Kaden Robinson answered with two free throws of his own with 1:16 left.

Then things really got interesting.

Shelby Valley’s Keian Worrix was came up with a steal from behind on Castle. Castle was whistled for the foul and then, an intentional foul was called on the play.

That gave the Wildcats an one-and-one and then two free throws and the ball.

Worrix missed the front end of the one-and-one.

Potter stepped to the line and drained his free throws to cut the lead to 56-54 with just 46 seconds left to play.

The Wildcats got the ball back and Potter drove to the basket and was fouled with just 14 seconds left.

Potter made the first free throw, but uncharacteristically missed the second.

He made the first and uncharacteristically missed the second.

That gave Shelby Valley one last shot, but a three at the buzzer didn’t go in and Paintsville pulled out the win.

This will be Paintsville’s first appearance in the 15th Region All “A” Classic since 2008.

Paintsville coach Landon Slone was a senior in 2008 and helped lead the Tigers to the All “A” Classic state tournament. The Tigers lost in the championship to University Heights 74-68 that season.

Paintsville found a way to move on to the 15th Region All “A” Classic championship.

Paintsville and Phelps both struggled to score.

It was a defensive war between the two squads.

Phelps held an 11-9 lead after the first.

Neither team scored double digits in the second or third quarters. Paintsville scored 11 points in the fourth.

In the fourth, Paintsville outscored Phelps 11-7.

Colby Fugate and Nick Keeton each scored in double figures for the Tigers. Fugate scored a game-high 13 points, while Keeton scored 10 points and pulled down seven rebounds.

The Wildcats jumped out to an 18-0 lead over Pikeville Saturday night in the last semifinal.

Pikeville lost Laithan Hall to an injury the night before and lost Rylee Sammons in the first quarter as well.

After Pikeville settled down, they cut into the lead and had it to 10 by the fourth.

Pikeville couldn’t ever really get back into the game.

Cody Potter had a huge night for the Wildcats scoring a game-high 33 points. He knocked down four of his eight three-point attempts. Potter also grabbed nine rebounds and came up with three steals.

Eli Sykes also had a big game for the Wildcats as he scored 16 points and grabbed nine rebounds. Kaden Robinson added 10 points. Eighth-grader Russ Osoborne chipped in with four points and Keian Worrix had three points, three rebounds, four assists and two steals on the night.

Nick Robinson led the way for Pikeville with a team-high 18 points and nine rebounds. Grayson Harris followed with 13 points and two steals. Seth Pugh and Connor Byers each scored six points. Tate Walters and John Flanery each had four points. Rylee Sammons scored one before leaving with an injury.

The Wildcats out rebounded Pikeville 33-21.

The Wildcats walked away with a 61-57 win over the Blackcats in the 15th Region All “A” Classic at the Appalachian Wireless Arena Friday night.

Cody Potter led the way for the Wildcats scoring a team-high 19 points and pulling down 10 rebounds. Keian Worrix followed with 14 points and five assists. Worrix made some big plays down the stretch to help the Wildcats pull out the win.

Shelby Valley took control in the third outscoring the Blackcats 18-4.

Prestonsburg fought back and outscored the Wildcats 28-18 in the fourth, but it wasn’t enough.

Each team had 12 turnovers.

Shelby Valley out rebounded the Blackcats 20-16.

The Pikeville Panthers won Friday night in an overtime thriller with a final score of 78-71 over the Martin County Cardinals to advance to the All “A” Classic semifinal.

Pikeville was without one of their key starters for most of the game. Laithan Hall went down on a play late in the first quarter and was unable to return to action, but other players stepped up and delivered when the team needed it most.

Martin County came out of the blocks fast. They controlled the tip and were the first on the board with a three-pointer from Jordan Dalton.

Soon after, Pikeville started heating up with two threes of their own as well as some free throws from Rylee Samons; that sparked a 14-5 Pikeville run in the last five minutes of the first.

In the second, Martin County outscored the Panthers 18-13 which included some strong plays from Trey James. A monstrous dunk at the halfway point of the second sent shockwaves through the stands. Not long after, James was fouled on a shot and still managed to get the bucket. He then converted on the free throw to tie the game with a minute and a half left in the second.

With a close score of 27-26 at the half, Pikeville came out hot and outscored the Cardinals in the third with strong contributions by Sammons and Conner Byers. The Panthers held a 43-36 lead entering the fourth.

Just as the game was winding down and everyone thought it was over, the Cardinals scored five unanswered points in the last 45 seconds to tie the game at 57-57at the end of regulation. Trey James converted another three-point play and then Jordan Dalton scored off the fast break tying the game with only 12 seconds remaining.

In ovetime, it was a battle from the line with both teams shooting a combined 21 free throws in the final 4:00 period.

James struck first with a strong move to the rim which resulted in an alley-oop dunk in the first 15 seconds of overtime for Martin County.

Pikeville then went to work with Tate Walters scoring five unanswered points to put the Panthers in front with 2:30 left on the clock. The teams then began trading free throws which eventually led to the win for the Panthers.

Rylee Samons led the Panthers in scoring with a game-high 27 points and six rebounds. He scored 12 points from the free-throw line on a perfect 12 for 12 shooting night. Grayson Harris and Nick Robinson added 13 points and 10 points respectively.