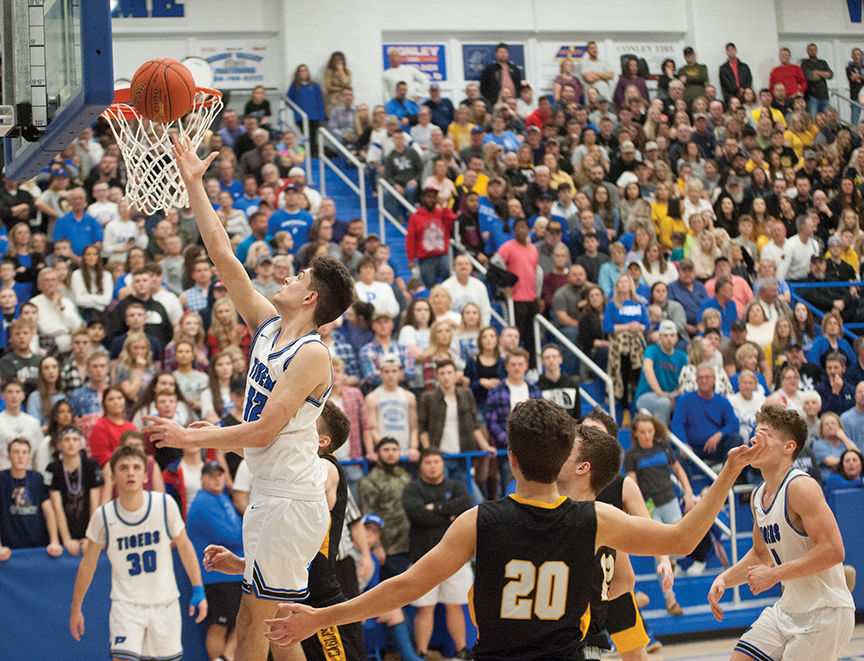 Paintsville’s Colby Fugate goes up for a layup against Johnson Central Friday night in 57th District action. Fugate scored 23 points to the lead the Tigers to a 52-50 win over the Golden Eagles. 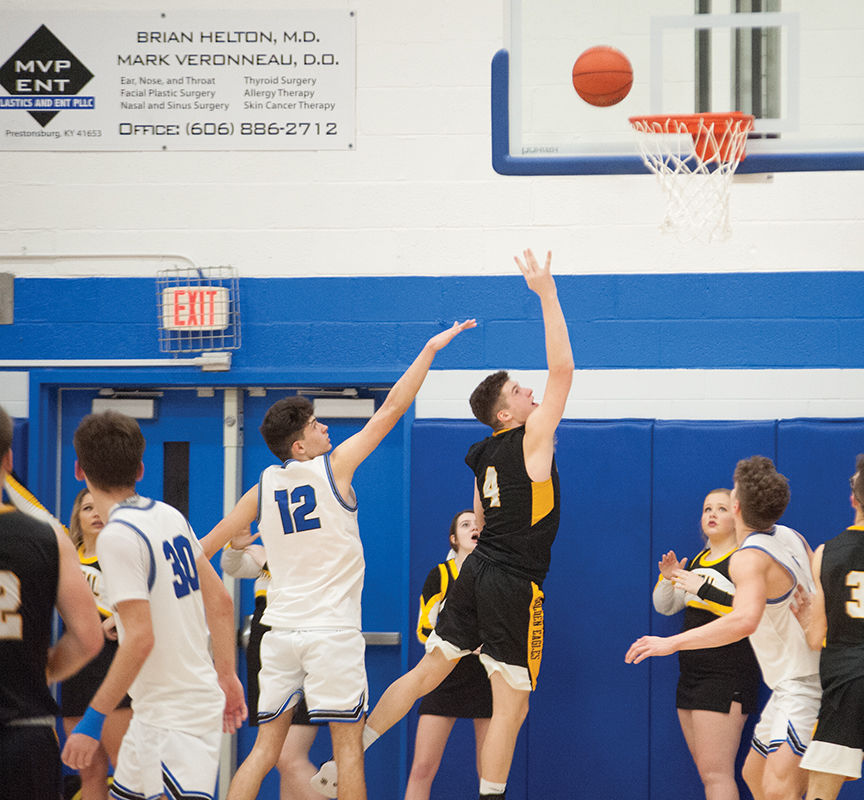 Johnson Central’s Isaiah May goes up for a shot against Paintsville’s Colby Fugate Friday night in 57th District action.

In any sport, it’s always the biggest game in all of Johnson County. Johnson Central at Paintsville. Friday night was no different as Tommy McKenzie’s Golden Eagles made the trip across town to visit Landon Slone’s Tigers. With the passion these kids bring, this game never disappoints and Friday evening was another classic as Paintsville pulled out the district thriller 62-60.

The Tigers took control of the game early as they out scored Johnson Central 16-6 after one period of play. Paintsville flexed their muscle shooting 12 of 26 from the field, good enough for 46 percent.

The Golden Eagles turned it on to start the second. Led by Cory Vanhoose’s 14 first half points, coach McKenzie’s squad bested the Tigers’ 27-11 in the second quarter. Connor Lemaster was three for four beyond the arc in the first half boosting the Golden Eagles to a 33-27 lead going into the locker room.

The lead changed six times in the first half as well. Paintsville held the advantage in the paint, as they out paced Johnson Central 14-4. However, the Golden Eagles got a huge boost from their bench as they led in bench scoring 15-0.

The second half was a back-and-forth battle as each team matched the other basket for basket. Vanhoose, drove his way to the basket almost at will for the Golden Eagles, however, Colby Fugate seemed to have an answer nearly every trip.

The Paintsville defense held Johnson Central to 10 points in the third quarter, as the Tigers’ tacked on 17.

Paintsville got the hot hand in the late stages of the game, as they shot 54 percent from the floor in the second half. The Tigers’ also shot a blistering 60 percent from beyond the arc helping them pick up the big district win on their home court.

Bears Insider Podcast 184: A newsy week for the Bears

Hot? Not? However you view Packers' Aaron Rodgers, he has Super Bowl in his sights

What does Arizona have? What do the Wildcats need? A look at the UA football roster

The score was tied six different times in the final minutes of the game. VanHoose put the Golden Eagles on top 60-59 with his bucket underneath with 57.8 seconds to play. However, it wasn’t enough as Baron Ratliff’s three pointer with 34.8 left in the game put the Tigers’ on top for good to clinch the 62-60 win.

Paintsville was led in scoring by Fugate with 23 points and four rebounds. Braxton Tharp poured in 14 points in the win. He was followed by Nick Keeton with 12 points and eight boards and Ratliff finished with 11 points and five rebounds.

Johnson Central was led in scoring by Vanhoose with 25 points and five rebounds. He was followed by Conner Lemaster with 13 points and two boards. Isaiah May finished with nine points and 10 rebounds.