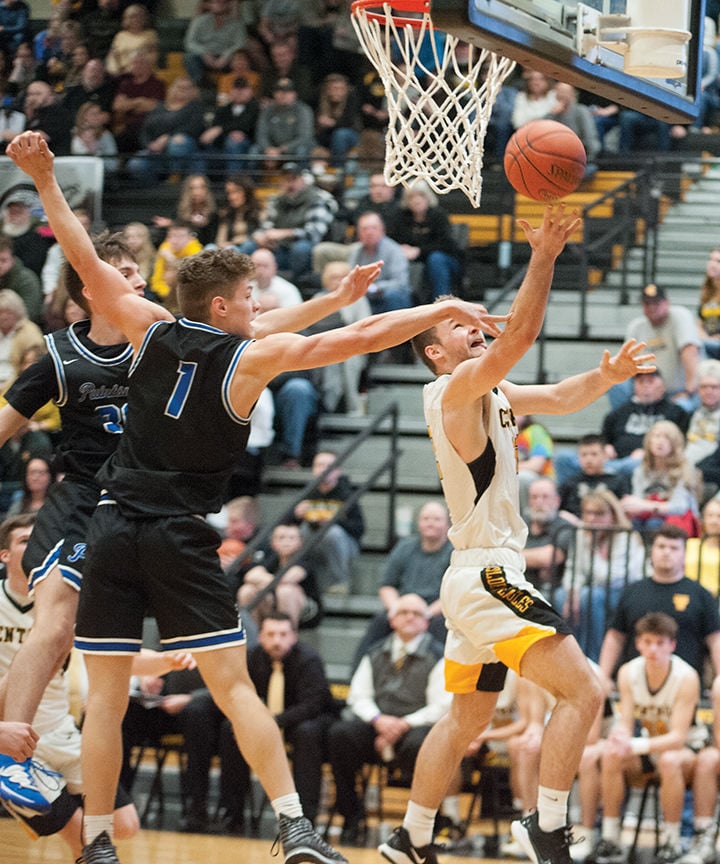 Johnson Central’s Cory VanHoose goes up for a shot against Paintsville Saturday night in 57th District action. VanHoose had a double-double for the Golden Eagles. He scored 18 points and pulled down 10 rebounds in Johnson Central’s 57-47 win over the Tigers. 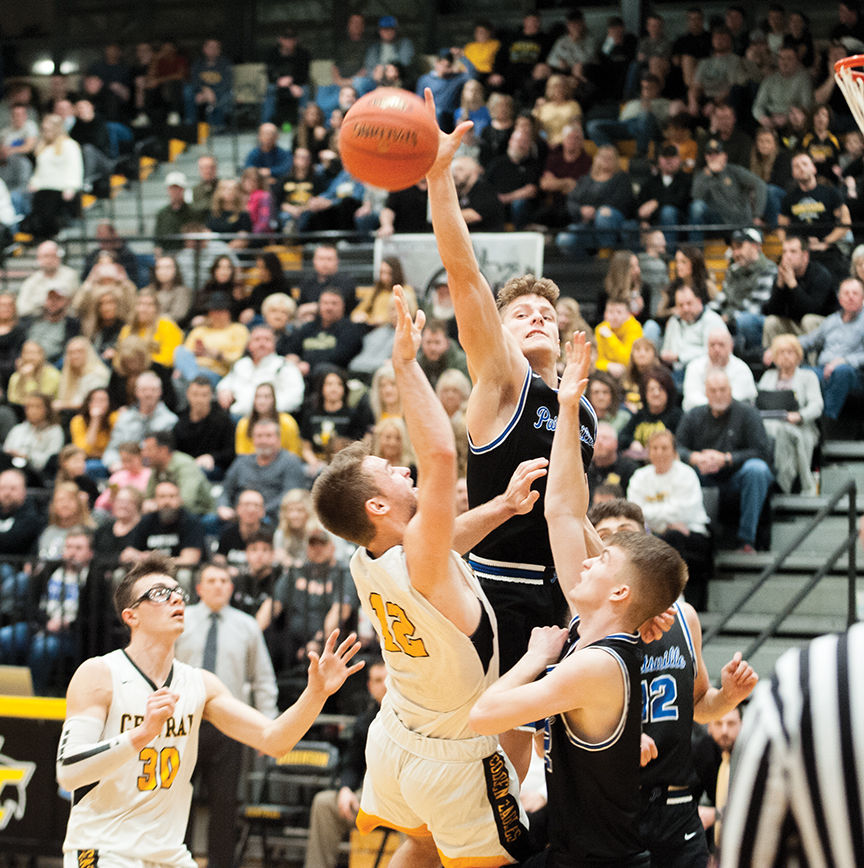 It’s comparable to Rocky II, when the Italian Stallion takes on Apollo Creed in their famous rematch. Or Muhammad Ali versus Joe Frazier in the “Thrilla in Manilla.” Hands down, the Paintsville versus Johnson Central game is one of the biggest events in the area and it never disappoints.

Saturday night was no different as the Golden Eagles picked up a big 10 point district win 57-47 over Paintsville in front of a sellout crowd.

Both teams started out a bit icy as neither squad lit the statistical categories on fire in the first half. Johnson Central held a slight advantage after one period in the books at 13-7. Paintsville answered right back to start the second quarter, as they would storm back to tie the game at 22-22 as the teams headed for the locker room.

Paintsville missed all six of its shots from three-point land, compared to Johnson Central’s one for five shooting from deep.

The first half also saw the score tied twice with the lead changing three times. The Tigers’ Colby Fugate finished the first half in double digits with 11 points. Isaiah May countered for Johnson Central with 10 first half points of his own.

To start the second half, the butterflies had apparently settled as the two teams started to battle. It was a back-and-forth most of the second half.

Driving for 6: Hitting the recruiting trail for 2022 updates, big summer plans and a personnel note

The Golden Eagles outscored the Tigers’ again in the third 16-13 behind a 20-5 points off turnover margin. Turnovers were plentiful Saturday night as the Tigers’ finished with 16 and the Golden Eagles coughed up the ball eight times. Johnson Central also won the battle underneath as they scored 28 points in the paint to Paintsville’s 22 points.

The fourth quarter found the Tigers’ down five at 40-35 after Bryson Hackney’s bucket. Paintsville’s Nick Keeton cut the lead to four at 45-41 minutes later as he hit the front end of his trip at the free throw line, but that was as close as the Paintsville got the rest of the way. Grant Rice’s free throw with 28.9 left in the game sealed the deal for the Golden Eagles as they went on for the 57-47 district win.

Johnson Central was led in scoring by Isaiah May with 24 points, five rebounds and two assists. He was followed by Cory VanHoose’s double-double of 18 points and 10 boards. John King added six points, six rebounds and four blocks in the win.

Paintsville was led in scoring by Colby Fugate with 20 points and two rebounds, Braxton Tharp added 12 points and four assists. Nick Keeton recorded a double-double of 11 points and 13 boards in the loss.

Johnson Central will return to action Tuesday February 4th as they welcome Perry Central for a 7:30 p.m. tip.

Paintsville will return to action Tuesday as well as they travel to Belfry. Tip is scheduled for 7:30 p.m.