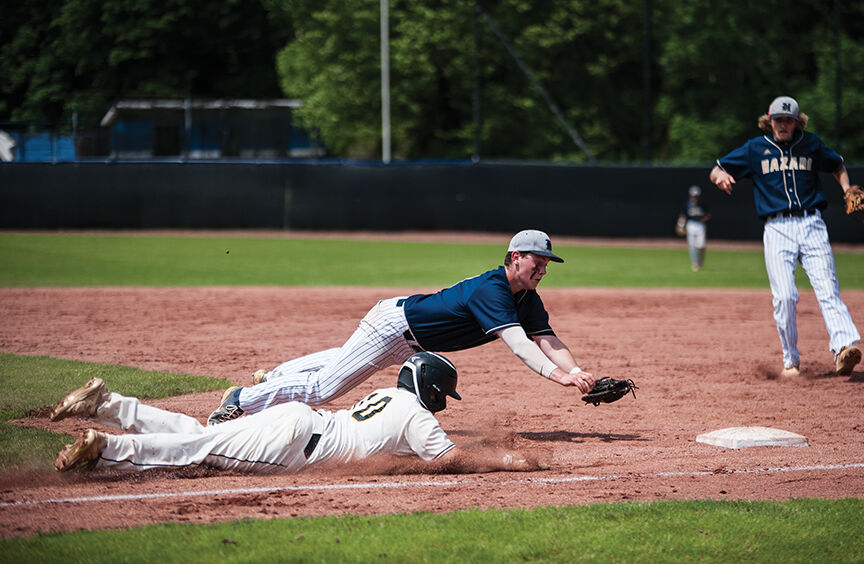 Hazard first baseman Dawson Duffy dives towards first base as Johnson Central’s Josh Slone tries to beat him to the bag by sliding head first. Duffy got the out on the play and Hazard pulled out a 3-2 win over the Golden Eagles in the Semi-State 8 at Morehead State University. 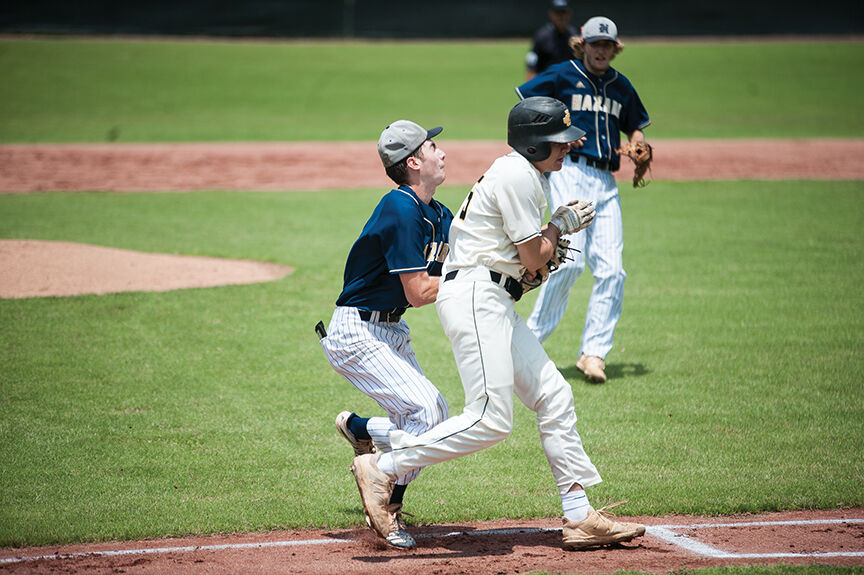 Johnson Central’s Gavin Crum is tagged out as he runs to first by Hazard pitcher Sawyer Patrick Saturday in the Semi-State 8 at Morehead State University. The Bulldogs pulled out a 3-2 win over the Golden Eagles.

Hazard’s season looked like it was coming to a close as the Bulldogs trailed 2-0 in the top of the seventh inning.

Two outs and the Bulldogs’ season would be over.

But never say never in baseball.

Hazard rallied to score three runs in the top of the seventh and pull out a 3-2 comeback win over Johnson Central in the Semi-State 8.

The Bulldogs advance to the Elite 8 round of the KHSAA State Baseball Tournament at Whitaker Bank Park.

Hazard will take on Louisville Trinity at 8:30 p.m. Thursday night.

In the top of the seventh with one out, Hazard’s Max Johnson reached base on a walk. Hank Pelfrey hit the ball off the end of his bat that worked out to be like a bunt. He hustled down the first-base line and dove head first into base. It was a close play, but he was safe. That put runners on first and second. David Mullins followed with a single to load the bases.

With the bases loaded, Dawson Duff hit a two RBI double to tie the game at 2-2.

Johnson Central intentionally walked Sawyer Patrick to get a force out at any base.

With the bases loaded and one out, Matt Craft laid down a suicide squeeze bunt. The throw went home, but the runner slid into the base before the ball got there giving Craft an RBI and the Bulldogs a 3-2 lead.

Jarrett Napier followed with a suicide squeeze of his own. Again, the throw went home and again, it was close, but this time the runner was called out.

Johnson Central got out of the inning as Samuel Shoptaw flew out.

The Golden Eagles couldn’t rally to tie things up in the bottom of the seventh as Hazard pulled off the comeback win.

Patrick got the win on the mound for the Bulldogs. He threw a complete game. He gave up two runs (one earned) on six hits, while striking out nine and walking one.

Johnson Central got off to a quick start.

In the bottom of the first, Matt Crum hit a leadoff double to the left field fence. Ryan Sartin-Slone followed with an RBI double as the Golden Eagles took a 1-0 lead after the first inning of play.

The Golden Eagles got going again in the bottom of the second. Keygan Pelfrey hit an infield single to leadoff the inning. Gavin Crum followed and reached on an error allowing Pelfrey to score and push the lead to 2-0.

After that, Patrick settled down and only gave up three hits the rest of the game.

For Johnson Central, starting pitcher Cameron Kelsey threw a great game. Kelsey threw five innings of work and didn’t give up any runs and only gave up five hits and struck out two batters. Crum came in for relief and threw one and 1/3 innings of work and gave up three runs on three hits with on strikeout. Connor Lemaster came in and threw the last 2/3 innings for the Golden Eagles.

Johnson Central finished the season with a 26-14 record.

Hazard (30-12) is scheduled to take on Louisville Trinity at 8:30 p.m. Thursday at Whitaker Bank Park in the KHSAA State Baseball Tournament.