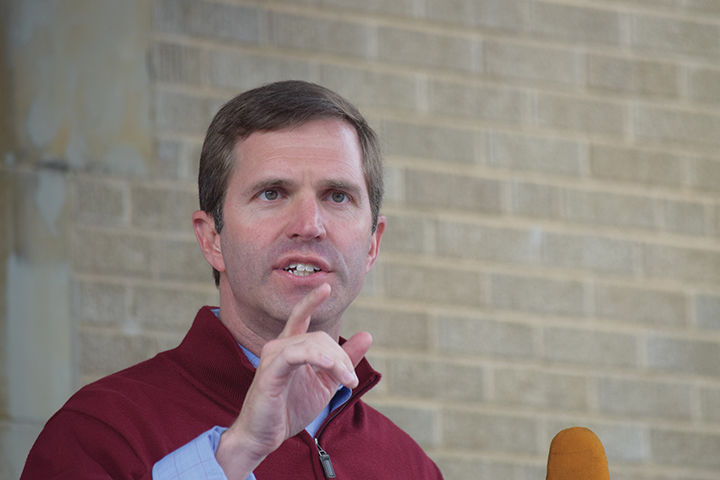 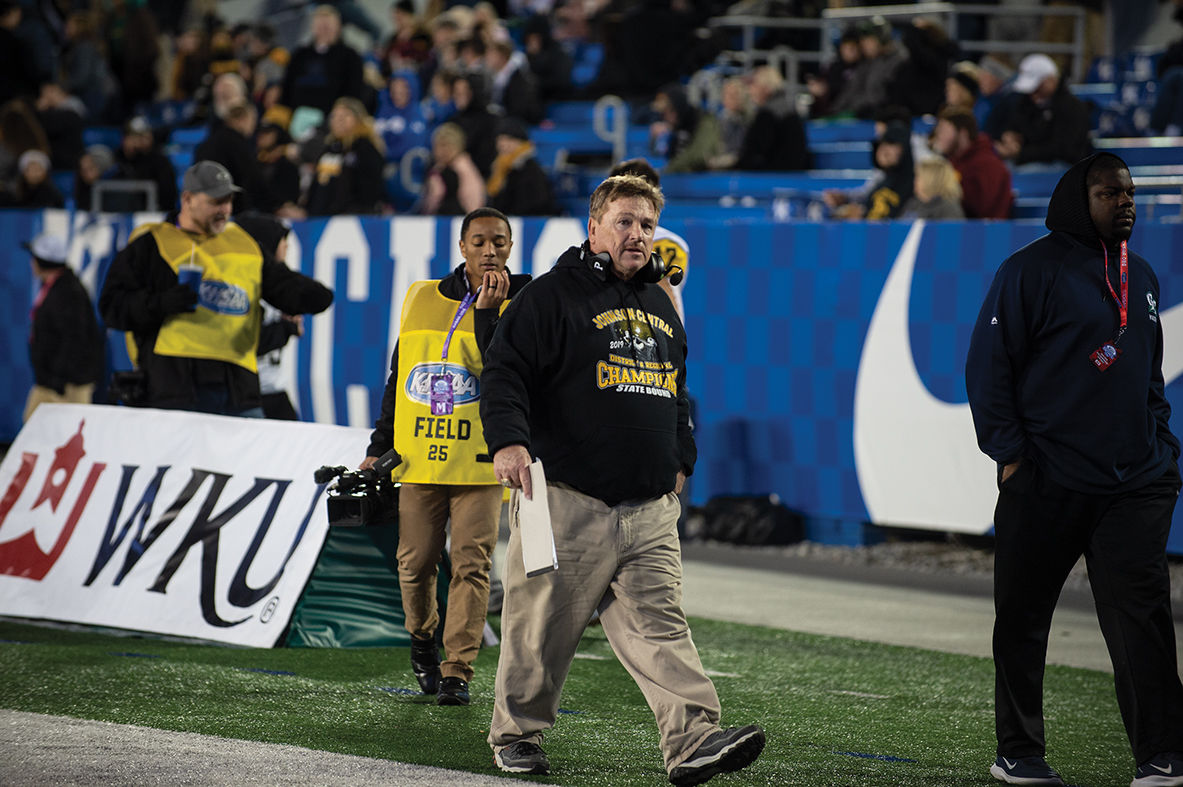 Johnson Central football coach Jim Matney walks the sideline during the Class 4A State Championship game at Kroger Field in Lexington. Matney’s response to controversial comments by Boyle County officials prior to the game in December went viral and the Golden Eagles won the game 21-20. 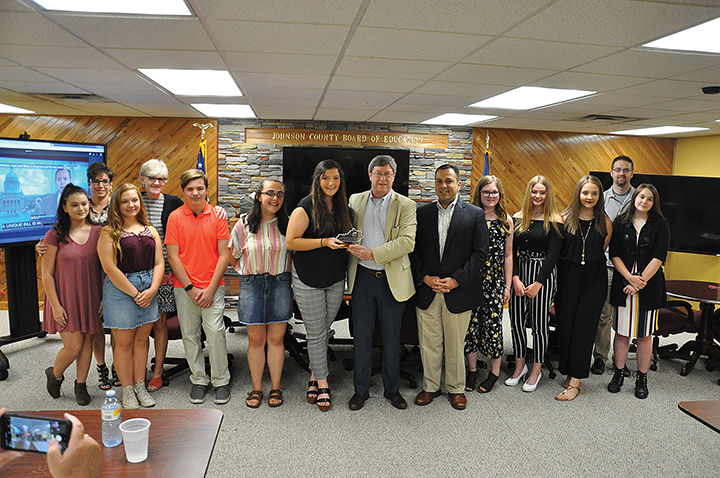 The Johnson County Middle School’s “Juul Breakers” team, with their coaches, were awarded the Foundation for a Healthy Kentucky’s Policy Champion award in May for their hard work, including pressuring Frankfort to take action on vaping in schools. 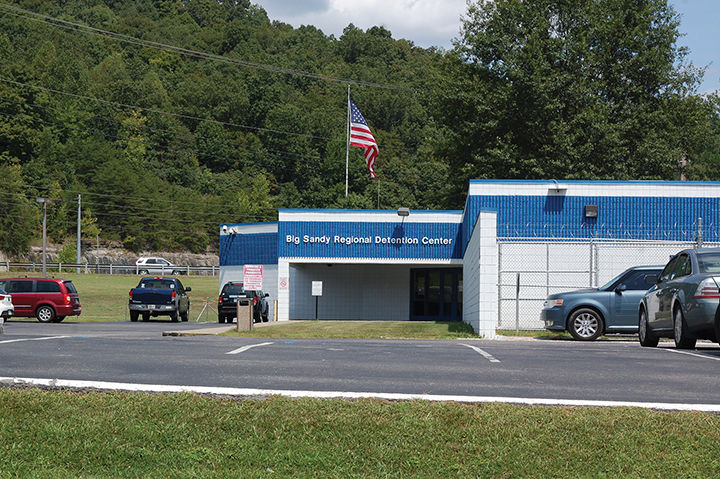 The Big Sandy Regional Detention Center was a center of controversy and activity over the year which included a change in administrators and the adoption of several policies and infrastructure intended to make the facility more safe for employees and inmates, as well as to attempt to operate with budgetary losses.

This was a year – 2019 — that changed the face of the community, in which failures and missteps were tempered with slow, deliberate successes, leading Johnson County into a future which looks markedly different than its past.

As the year ends, we take a look back at just a few of the stories which made an impact on our community and will likely continue to do so in years to come:

Voters in the state chose a Republican for every constitutional office, except one — governor.

In the race for governor, Matt Bevin lost to Democratic challenger Andy Beshear, who took 709,577 votes statewide, compared to Bevin’s 704,388. However, locally, the results were somewhat different in the November general election.

Bevin’s unpopularity with much of the electorate became clear in the May primary election, during which the governor won with 52 percent of the vote, compared the 39 percent of the vote brought in by his challenger, Robert Goforth. In Eastern Kentucky, Goforth took many counties, including Johnson, where he seized nearly 60  percent of the vote over Bevin’s 32 percent.

Following the primary, Bevin made numerous trips to Eastern Kentucky to announce new economic development projects and award funding for projects such as roads. Included in those visits was a campaign stop at the Appalachian Wireless Arena in Pikeville headlined by Donald Trump Jr., son of President Donald Trump and a presidential adviser.

The visits may have made an impact, with Bevin taking more than 61 percent of the vote against Beshear in Johnson County, but the local results weren’t enough to close the gap which was formed by a Beshear-centric urban vote, as well as a spattering of counties in rural areas, including Floyd County, going to the Democratic challenger.

The new governor and the Republican supermajority-led legislature are planning to go into session Jan. 7. During the upcoming session, the legislature will set the state’s spending plan for the next two years.

The Big Sandy Regional Detention Center saw big changes in 2019, with concerns being raised about operations and the facility’s financial status coming to a head with a change in administrators.

The BSRDC board began the year discussing how to make up losses in revenues the jail had experienced since Morgan and Elliott counties moved their inmates to the new detention center in Rowan County.

By the next month, issues being raised included overtime expenses and mold in some areas in the jail, including some areas where board chair Daniel Castle said the mold was so thick, “You could write your name in it.”

By March, a contentious meeting led to some board members walking out of a closed session, and, in April, the board voted to suspend BSRDC Administrator F.D. “Pete” Fitzpatrick for 30 days, with his termination to follow at the end of the 30-day period.

Castle said at the time that Fitzpatrick’s firing was with cause.

“The reason he was suspended was because of his systemic failure to following established policies and procedures, resulting in substandard and inhuman living conditions, resulting in potentially life-threatening conditions for not only the inmates but the employees also,” Castle said.

However, the decision turned out to be costly one for the BSRDC, with the board being forced to amend its budget in November to accommodate an out-of-court settlement with Fitzpatrick in the amount of $75,000.

In July, the board held its first meeting with newly-hired Administrator Byron Hansford.

Hansford has advanced several proposals, including attempting to collect booking fees and dealing with the issues brought up earlier in the year.

As Johnson Central High School and Paintsville High School were planning to travel to Lexington to participate in the Class 4A and Class 1A state football championships, respectively, the celebrations were hijacked early by a video which emerged from a pep rally held by Johnson Central’s opponent — Boyle County.

In the video, a speaker refers to people from “Johnson Central” not being able to count to 100 and other speakers made comments about “hollers” and sending Johnson Central back to the “hollers.”

The comments ignited a firestorm of controversy, with Boyle County Superintendent Mike LaFavers issuing an apology to Johnson County.

Matney expressed to Johnson Central students in a video posted to social media before the game that he didn’t expect an apology from the Boyle County officials for the comments.

However, he said, they’re missing the point.

“But what you really probably don’t understand down there is the beauty and the talent in the mountains,” he said.

Matney also told the students he holds no animosity over the comments.

“I hold no animosity towards any of them down there,” he said. “They don’t know because they’ve not been here. They don’t know what it’s like to be from the mountains.

“I wish them the love, the peace and the joy that we have right here in Johnson County, in the hollows,” he said.

Johnson Central also allowed their football talent to do some of the speaking on the matter, taking a 21-20 victory over Boyle County.

By February, McKenzie joined in with the City of Paintsville for an already-planned Town Hall meeting during which he discussed a need for agencies to work together.

The cooperation between the agencies continued later in the year, when McKenzie, Paintsville Mayor Bill Mike Runyon and other officials joined together for Community Listening Sessions, a part of building a Community Strategic Plan, set to be completed early in 2020.

A wet winter led to severe problems in February in Johnson County, as a combination of heavy rain and a high river level led to residences and other buildings being flooded.

Johnson Emergency Management Director Gary McClure told The Paintsville Herald that the flooding caused all the county’s agencies to have to respond.

“It was just one call right after another,” McClure said. “People trapped in their homes with water all the way around the residence, people that had driven into high water and gotten stranded in their vehicle, we had numerous calls about that, plus flooding coming into people’s homes. So, all of the county fire departments were out assisting, but they were encountering trouble with all of the volunteers just getting out of their houses and getting to the fire station.”

Schools were closed, many residents lost power and water and, later, after waters receded, the county learned that the U.S. Federal Emergency Management Agency would not be providing help to recover, though the U.S. Small Business Administration would be making loans available to affected residents and business owners.

A group of Johnson County Middle School students drew attention to the region for a good cause in 2019, with the advocacy of the school’s Community Problem Solving team, known as the “Juulbreakers,” on the cause of ending the use of e-cigarettes in the state’s schools becoming known statewide.

The students, along with Sen. Brandon Smith, took action in the legislature in an attempt to pass legislation that would have established several measures to fight the use of the substances in schools. The bill ultimately passed in the Senate but was not brought up in the House. Students from the group testified before the Senate Health and Welfare Committee to advocate for the bill’s passage.

In May, the group was awarded the Foundation for a Healthy Kentucky’s Policy Champion award for their work in pressuring Frankfort to take action on the matter.

The students’ work on the issue drew more attention in August, when Gov. Matt Bevin chose the school as the site and the students to join him in the ceremonial signing of House Bill 11, which encourages school system in the state to ban tobacco and other nicotine-containing products from their campuses.

Bevin gave the “Juulbreakers” the credit for the passage of the measure.

Concluding the ceremony was Bevin, who praised the students who helped create the legislation.

The success was not the only success the Johnson County Schools District saw in 2019. Other successes included: